If you’ve walked by your vivarium, you may have had to stop and ask yourself, is my bearded dragon waving at me?

Usually, the answer is yes, since bearded dragons can and do wave!

But what does it mean?

CHECK: Do bearded dragons breathe when they sleep?

How Do You Recognize a Bearded Dragon Wave?

Usually, bearded dragons lift their arms in a circular motion to communicate submissiveness. So smaller males will typically do this to show bigger, tougher ones that mean no harm.

If a bearded dragon is waving at you as you walk past, it’s to show you that they think of you as the alpha in the house!

You might notice your dragon comes up close to the glass of their tank to do their little display, and this is likely because they are trying to communicate.

However, the behavior is commonly misunderstood. Let’s go over some of the most common misconceptions.

From “they’re saying hi!” to “they all do it,” these are the most common myths surrounding a beardie’s wave.

It’s a Form of Greeting

The idea that your dragon is waving to greet you is adorable. But, unfortunately, it is probably inaccurate. Bearded dragons can recognize their owners, but they don’t think the way that we do.

We humans, tend to anthropomorphize our pets. That big SAT word means that we impart human qualities on them.

There is nothing wrong with seeing your beardie as your friend and companion, but it’s important to understand that speak their own bearded language, otherwise, we can miss vital signs of trouble.

A bearded dragon often waves as an expression of submission. However, they mostly use waving as some form of social cue. Therefore, a bearded dragon that never experiences a need to wave probably won’t.

If your beardie doesn’t wave, it is not a cause for concern. On the contrary, it may even mean that you are doing a good job of providing a stress-free environment.

There is a myth that only female beardies wave. However, there is endless evidence to the contrary. Both male and female dragons wave for a variety of reasons, most of which are social cues.

How Does it Look When a Bearded Dragon Waves?

You will know that your dragon is ‘waving’ when they lift and rotate one of their front legs. The action looks a little slow and robotic since they aren’t evolved for excessive body language the way a dog is.

Nevertheless, they will raise one of their front legs and move it in a slow and deliberate circle, almost like a one-armed breaststroke.

Take a look at these cute beardies:

There are a couple of reasons why your dragon might wave. Although bearded dragons are solitary, they have developed some interesting ways to relay basic information.

It is important for their survival. Beardies will come across other members of their species from time to time and need to tend to the business of mating as well.

Have you ever spotted your bearded dragon bobbing its head? If so, you likely own more than one dragon, or they often spot their reflection.

Bearded dragons bob their heads as a sign of dominance. This is a natural behavior and an important part of their complex social hierarchy.

A bearded dragon can respond to this show of dominance by challenging the alpha dragon.

However, if it chooses to submit instead, a bearded dragon will lift one of its front legs and wave in a display of submission. Both male and female bearded dragons show this behavior.

Dominance plays an important role in deciding basking spots. In nature, a particular rock or hillside may offer just the right amount of heat and sunlight.

As a result, bearded dragons will often vie for dominance to secure some prime sunbathing real estate.

A display of submission can be the difference between an amicable, disinterested encounter with another bearded dragon and a vicious fight that could lead to fatal wounds.

It’s prudent then for younger, weaker beardies to submit to their elders at the drop of a hat.

Baby beardies appear to practice submissive gestures on each other, even when there is no antagonism on display. Unfortunately, these early attempts are usually cartoonishly exaggerated.

Bearded dragons take between eight months and one and a half years to reach maturity. Because of this, they spend most of their first year(s) learning submissive behaviors.

Full maturity seems to kick in at around two years old. It is then that one generally starts seeing more attempts at dominant behavior.

Just as there is a huge discrepancy in how long it takes for dragons to mature, their social behavior also varies greatly from dragon to dragon.

Using the same gesture to communicate submission and readiness to mate may sound confusing.

Still, dragons seem to understand subtle nuances that differentiate the two. That is pretty a common, natural behavior in the wild.

In the wild, it may be a mating behavior when female bearded dragons waves at males. Therefore, if you only have one dragon, or your lizards are all male, it is unlikely that any waving is amorous.

If the behavior is a mating signal, you should see a couple of other related behaviors. First, there may be some head bobbing amongst males trying to assert their mating right.

The female often displays unusual behavior as well, such as deliberate, organized movement around the dragons’ tank.

We have mentioned that bearded dragons are solitary creatures. That is true of all six of the subspecies that comprise the Pogona genus.

However, unlike many other solitary animals, all Pogona do form loose associations and share geographical areas.

That creates a pseudo-pack of sorts. However, there is no real cooperation between the animals, such as in a pack of wolves or pride of lions.

Therefore, they are tolerant of each other. Tolerance does not translate into social behavior, though. In nature, bearded dragons will frequently take a breather and find ways to spend time alone.

They are rarely afforded this luxury in captivity. While a couple of dragons should get along fine, keeping too many together can cause problems.

Bearded dragon males are very territorial, which only adds to confined living areas in captivity. Moreover, the aggressive behavior that ensues can lead to severe injuries.

If your dragon waves a lot, displaying submissive behavior or aggression to other dragons, you likely have an overcrowded beardie tank.

There is no exact science to the number of dragons you can house together. Personalities differ between beardies, as do aggressive behaviors.

Ideally, you want to keep it down to two, at most, three bearded dragons per enclosure. If your beardies still display aggressive behavior or excessive waving, you should consider housing them in separate tanks.

Beardies spook surprisingly easily. If your dragon waves more than usual, you need to look out for anything that may be causing a fear or stress reaction.

Other pets are the most likely candidate when it comes to scaring bearded dragons into waving. Dogs are alien to beardies, and loud barking or growling can upset your bearded dragon.

Seeing or hearing another, bigger animal and startle them into a fear response and cause them to wave.

The clear sounds of children at play could also sound chaotic, like an unknown threat. That seems at least to be how bearded dragons experience it.

Random movements are a sign of danger for these lizards. Children bumping up on the glass of their tanks would seem very threatening.

Waving in these situations indicates a fear response. They are genuinely afraid that the large creatures intend to harm them.

Bearded dragons have an acute sense of hearing. They need this in the wild, where they need to be aware of potential predators at all times.

Humans are anything but silent, and the many noises we make can cause our beardies serious distress.

Music, home appliances, and the various noises of day-to-day life can cause dragons to wave excessively as a fear response.

Bearded dragons are sensitive creatures at heart. Small changes can make them uncomfortable or nervous.

A nervous dragon might wave to show that they are uncertain about their security and unhappy with a change. New tanks or changes in their environment are often the problems.

Naturally, the wrong kind of tank will cause your beardie distress, but there are also nuanced aspects to their home that may be easy to miss.

You should do your research and consult a professional before purchasing a tank for your dragon. However, even tanks designed as beardy enclosures might not meet your dragon’s individual needs.

A tank could be too small for your dragon. As we know, bearded dragons are each unique and have their likes and dislikes. Your dragon may need more space than the average to be content.

10. The Things That They Can See

What does your dragon’s view look like from their perspective?

Bearded dragons can indeed be apprehensive of decor they don’t fancy. However, they might also have a view of predators or artificial lighting that can upset them.

A bearded dragon should not have a view of the world outside your home. Although it sounds restrictive, beardies do not appreciate the sight of birds and other animals very much.

Bearded dragons need spaces that allow them to hide. When a dragon feels insecure or threatened, a space where it can hide offers them a sense of security out of sight of the outside world.

A beardy without a place to hide will probably become anxious, which they could try and communicate through waving.

Your dragon pal’s home should appear a microcosm of their natural environment. Doing a bit of research can help.

The six types of Pogona share many of their traits in common, but they do come from different environments.

It is a creative project where you can bring together the various elements that will make your pet feel more at home.

Should I wave back at my bearded dragon?

You can wave back at your bearded dragon if you like. However, it doesn’t mean that your Beardie will understand your wave. A more helpful thing to do is to remove any stressors from their environment so that do not have to wave out of fear.

Baby bearded dragons wave more often to indicate that they are small and intimidated.  They usually grow out of this so long as you keep your interactions with them calm and positive.

Why do bearded dragons bob and wave?

Bearded dragons bob their heads to assert their dominance over others. Usually, this is during mating to females, or as part of a mating dance when males court females.

It can also be a sign of aggression to others, especially other males. A smaller male submitting to the more aggressive one might wave to show it isn’t a threat.

Bearded dragons wave for several reasons. These include fear and discomfort. For example, your beardy could fear in response to loud noises, other pets, and children playing.

They can feel uncomfortable for various reasons, including change, an unsuitable tank, and a lack of hiding spots. Waving also acts as a way for a willing female to communicate interest to potential mates.

The bearded dragon’s wave does not communicate a greeting. Although you are welcome to wave back, it is most likely a one-sided gesture.

Have you seen your bearded dragon waving? Let us know in the comments below!

Hi, I’m Tamsin. I’m a serious animal lover and dog behaviorist and trainer. In fact, I live on a farm with nine rescues! So, I love writing about and creating awareness around the health and wellness of all animals. Find her on Linkedin. Read her latest articles Learn more about her HERE. 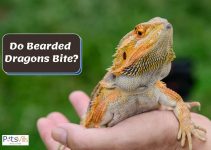 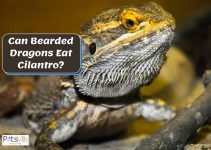 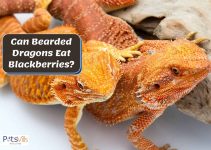