Chinchillas make great pets as they are fluffy, relatively easy to maintain, and can live up to 15 to 20 years. It’s no surprise that pet chinchilla has become increasingly popular.

Male chinchillas are usually cheaper than female chinchillas and the cost of each individual chinchilla will depend on what type of coat they have, their gender, size, age, and other features.

Black velvet and soft lavender grey chinchillas are quite often the most expensive typically cost from $125 to $160, but it hugely depends on who you are buying them from.

Are There Other Costs for Obtaining Chinchillas?

While buying a chinchilla, you also need to consider its cage. A chinchilla cage can range hugely in price.

Usually the larger the cage, the more it costs. On average a simple chinchilla cage may cost around $50 to $100 while a much larger one with multi-levels may cost upwards of $140 – $400 and more. This will vary depending on the brand and where you are building it from.

Objects for the Cage and Exercise Wheel

Because chinchillas are crepuscular, they always need a place to hide during the day. You can get a small wooden pen for less than $20, and exercise wheels for around $12.

Dust and a Bath Tub

Chinchillas also need to take a bath at least twice a week so you will need to consider the cost of the dust and the bathtub.

Pellet feeders are relatively cheap and you can buy water bottles for less than $10.

Chinchillas gnaw a lot, and so they would love some wood chews. Nibbles, balls, and alfalfa cubes cost between $2 and $5.

Transport Carrier for the Vets

Also, you will need a carrier to transport your chinchilla, and this costs about $15 to $30.

You can neuter your Chinchillas, but because they are can be allergic to anesthetics, it can be risky. Consult your vet. Neutering costs about $130 and spraying $160.

Where Can You Buy Chinchillas? 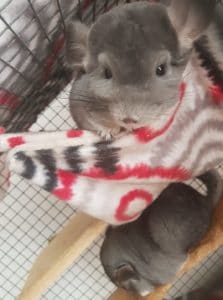 (More on this later in the article and why we wouldn’t recommend buying them from a shop).

These stores have chinchillas that are bred in captivity. They are not pouched from the wild and are not victims of illegal trade.

How Do You Buy Chinchillas?

Purchasing new chinchillas feels great, especially if you have never have had a chinchilla before. It is imperative to learn more about these animals and how to set up a conducive environment for them to make sure they have a happy and live a long life.

Before you buy chinchillas, prepare yourself accordingly.

Read more about these furry animals to know the right pet for you.

You can also check from websites that are dedicated to chinchillas. You can perhaps reach out to someone who owns chinchillas to get to know how it feels to own one.

Learn about the needs of pet chinchillas, are chinchillas nocturnal, diet, exercise, and social habits.

What Should You Know Before You Buy a Chinchilla? 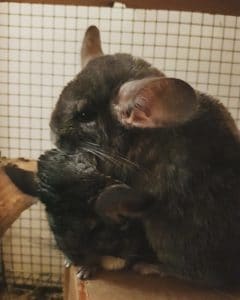 Many chinchillas are found in rescue centers because people bought them and did not have time to take care of them.

There are still many chinchillas out there that are suffering because of lack of attention. If you want to buy chinchillas, you must think carefully about the following issues before purchasing one:

Chinchillas can be destructive. Chinchillas love to chew, and so skirting boards don’t stand a chance. The same is the case with wallpaper, pot plants, handbags, and anything the little rodents can get their mouths on.

There are many ways to reduce the amount it chews by giving your chinchilla chew toys. They will also need some extra space to run around each day. Ideally, a room where it doesn’t matter if the chinchilla chews on things

Chinchillas are bright animals that need a lot of things to be amused. If you keep your chinchillas in small cages for extended hours, they can start to bite their fur and other repetitive behaviors.

It’s best not to leave chinchillas on their own because they love to live in groups. While other people argue they should, naturally chinchillas are social animals.

However, introducing chinchillas to other chinchillas is not an easy process, and they may fight at times. Learn how to properly introduce them to each other in this article.

Chinchillas Can Get Themselves Into Trouble

Chinchillas can get themselves into trouble. It isn’t uncommon for chinchillas to eat plants in pots (even if they are poisonous), eat woodwork such as skirting boards and jump on high things and land on the ground awkwardly.

They also may peel sellotape from boxes and wrap it around their noses. (Seen this done before).

Therefore, you need to take care of your chinchillas as well as their environment and make sure they do not hurt themselves. Accidents do happen sometimes, but in such a case you can always get a good vet. When your chinchilla is out of its cage you should keep a close eye on them.

Watch this video for additional information:

Can You Afford the Vets Bills?

Sometimes your chinchilla might need to go to the vets. Vet bills can be expensive and hugely vary in price depending on your location.

Some vets sell monthly pet insurance that will cover your vet bills. It isn’t uncommon for a chinchilla to get problems with its teeth and this can be quite costly to fix. You may have to travel to see/find a specialist.

Are There Recurrent Costs for Taking Care of a Chinchilla?

Oxbow chinchilla pet is many peoples’ favorite. You can find a 5-pound bag for $10. If you have one chinchilla, for example, it will require 2-3 tablespoons of food a day. So, a 5-pound bag will last you about two months.

There are many treats available for chinchillas. This will vary depending on your preference as well as your pet. Keep in mind; you should not overfeed your chinchillas with treats. So, give them sparingly.

The best option to buy is Blue Cloud Dust which may cost you about $9 for a 3-pound bag. However, this depends on where you purchase the dust.

The 3-pound bag will last you, and you will only need to replace it a couple of times per year.

Timothy hay and other types of hay

Timothy hay is perhaps the most popular choice among chinchilla pet owners. It is cheap, especially if you buy it in bulk. How much you will spend depends on the number of chinchillas you have and their preferences. So, you can budget around $5 per month for the hay.

These will vary based on the amount you want to buy and the behavior of your chinchillas. Fortunately, they are durable, and you can save a lot of money if you purchase in bulk. Budgeting around five dollars a month should be more than enough.

Should You Buy Chinchillas From a Pet Store?

Reasons why you shouldn’t buy from a pet store:

Most breeders give chinchillas vaccination and examination, and also neutering and spraying them before adoption. Breeders normally take care when matching the character of chinchillas and their prospective owners.

There’s No Guarantee That Chinchillas Are Healthy

Many chinchillas sold in pet stores have health issues and injuries. It does not matter if they are sold with a health certificate, this could only mean the chinchilla has been approved by a “vet” who may not even be qualified.

However, this does not check for parasites, genetic disorders, and testing for different diseases.

They Usually Have Psychological Issues

Recent studies found that dogs sold in pet stores showed signs of psychological disorders than those from breeders.

These chinchillas showed aggression towards owners and other chinchillas and showed some signs of escaping or running away.

This is because they are raised in small isolated conditions that stress them, especially the mothers when they are pregnant.

How do I know if I am ready to get a chinchilla?

Adopting a chinchilla means you are committing to looking after them for the rest of their lives. Chinchillas can live up to 20 years. Make sure to learn more about chinchillas before buying one.

How much are chinchillas?

The price of each individual chinchilla will be different. This will depend on the chinchilla trader and the features of the chinchilla itself. Fur color, weight, and lots of other variables. They range from $50 – $150 but can cost up to $400.

Is it legal to own chinchillas?

Chinchillas are legal in most states in the United States.

For how much did you buy your first chinchilla? Let us know in the comments below!