Bearded dragons are just the best, aren’t they?

Not only are they basically prehistoric dragons, but they’re also pretty good at being friends.

They’re companionable. They’re lively. They like to be held and cuddled. And their scales are literally made of magic.

But don’t just take our word for it! Take a look at these bearded dragon photos and see for yourself why we love them so much! (And why you will too!)

Their most notable feature is their beard, which they use to scare off predators when they’re in the wild.

In captivity, though, they’ll puff it out at [1] you if they’re sad or mad. They also bob their heads a lot when they’re happy!

But mostly, bearded dragons are really just weirdly cute. If you need any more proof of that, look no further than these photos of them being weirdly cute

Just look at Karen relax and get some sun on her wooden recliner having some dragon daydreams.

#2 A Bearded Dragon and Meal Time

Getting ready for his meal. Maybe it’s the green color that makes him want to snack away?

This 8-month old Coral Rocko Star loves to play with kids and even with the family’s pet dog! Colored balls serve as the perfect background for a dragon in studio pic.

Karma shows her mischievous side while she sticks her tongue out to say “hi.”

#5 Dragon on a Hammock

In their natural environment, bearded dragons do like basking under the sun on rocks.

This bearded dragon is definitely enjoying this moment as well.

ALSO CHECK: An Enjoyable Video About a Cat and Bearded Dragon Watching Cars

How about giving it up for this cutie as he gives us another pose of him on his favorite rock?

Bert is a one and a half year old bearded dragon reptile who likes having raspberries for snacks.

#9 Bert From Another Angle

If you can’t get enough of Bert, here’s another dragon portrait for you. No head-to-tail shots.

The head is enough to show how captivating he can get.

On what seems to be a woven mat, it really can be hard to distinguish Bruni’s body color from the background.

On what seems to be a woven mat, it really can be hard to distinguish Bruni’s body color from the background.

Notice that his color is different from other bearded dragons?

Bearded dragons love berries. So it isn’t surprising why Nova loves her blueberries.

This orange morph is simply stunning to look at and she knows it!

Basil is another orange morph.

His orange color though is mixed with white bands of color that makes him unique in his own little way.

Sedona is another orange morph whose body color makes her different. Orange morphs, after all, don’t carry common colors that typical bearded dragons have.

Sedona hates veggies, which is another of her atypical bearded dragon traits.

Here is another picture of 2-month old sage with something that looks like a mini hat on her head.

Dwight is another baby 2-month old dragon that seems to be a classic morph typical of bearded dragon species.

Also Read: Why is My Bearded Dragon Waving?

He was rescued from an abusive household in the past and is now happily living a much deserved life.

Ash is a rare female zero dragon morph. You can say she is dragon white as she is devoid of any color or pattern.

Draco is another zero dragon morph who happens to be male. His owner said that Draco just jumped onto her after seeing her in the pet store. Now, Draco is in a loving home enjoying all the attention he can get.

Jojo is a 7-8 month old female who happens to be such a diva too. Notice how she goes into such an elegant dragon pose?

Sparky is another adopted dragon after having been left without a home to care for him. This cute one-year old Pogona Vitticeps is spared from a sad family life and instead, is now family to his new hooman.

While Barry may seem to be a green morph, he actually is blending into the background which is typical of many bearded dragons.

Lizzy is a fun-loving dragon who hates eating greens although she does love her crickets. Her long tail makes her stand out among the members of her home.

Jovi may look like your typical bearded dragon. She does have a unique hobby though: tv watching.

Sushi, even at six months, has such beautiful colors and skin markings! She knows she is such a beauty.

Diva, the 9-month old doesn’t seem to be a diva but rather, an athlete.

What is there not to love about Veda?

This is a photo of Rex in his glass tank in the petshop. He just had to look irresistible so his hooman just had to take him home.

Cletus is obviously enjoying his worm snack in this photo.

Wizard is more than just a lizard. Just take a look at those scales and you’ll know he’s special.

Do not mess with Alduin with he’s busy with his salad greens!

Zeus seems to be a citrus or citrus tiger morph. Just look at those orange markings!

Translucent bearded dragons have transparent spines and scales. Look at his light color too, which is very different from your regular bearded dragon.

Here’s one more shot which gives a clearer image of those awesome spines and scales.

Spicy is most probably a white bearded dragon. White-bearded dragon morphs usually change color between white and gray depending on the climate, just like Spicy.

This beautiful 12-year-old white-bearded dragon morph is a rescue beardie who now lives in a loving home.

Lizzy is a 7-month old orange bearded dragon morph whose face seems to be filled with curiosity.

Joe is a classic morph. Don’t let his classic look fool you. Since he was named after a famous quarterback, it seems to be that he is just about ready to get into any game.

The pattern on Ruby’s scales are indeed gorgeous. Don’t let that look fool you though. You’ll know when she doesn’t care much for her veggies since she’ll end up stepping on them, says her loving hooman.

And here is one more shot of Ruby from her head to her tail.

Beardy likes to attend classes in school and is probably the most famous one in the class!

Echo was named after a velociraptor in the movie Jurassic Park. All he has though are killer looks. Other than that, he truly is a gentle creature.

Hildegard is a 5-year old who is recovering from trauma after having been abused in another household. Look at her as she calmly rests and sleeps on the hands of her new hooman.

Buddy, another orange morph, is in a serious business meeting.

Look at Bubbles and her happy smile. That’s the look of contentment when you know you are loved by your mama.

Nubs was injured by his mom when he was a baby. The mom bit his tail and his back feet so he was given up for adoption. He, luckily, survived and is now doing well in his new home.

Look at the blue color of the sky blend with Kai’s color! At 3-months old, she is still getting to know humans but is slowly getting there.

Carrot is another rescue bearded who has just turned two. Two and terrific too!

Another classic morph with the typical bearded dragon scale pattern. Don’t you just love the spikes and scales on his face too?

Athena is a gamer!

Quartz is a  three-year old classic morph who was placed into adoption. She obviously is quite comfortable in her new home too.

Here is another picture of Quartz, this time with his face in full view.

Still can’t get enough of Quartz? Here is another one of his handsome pictures.

Dragon in a bunny costume! Now if only he had an Easter basket…

Bearded dragons [2] are wonderful creatures that have a rare and majestic look.

There are many who try to raise a dragon in captivity as pets, but many end up being abused and not taken care of.

They are for any bearded dragon lover who thinks of beardies not only as objects of display. After all, they are pets and as pets, they are family.

Hi there, I’m Johanna a writer, cat cuddler, and all-around animal lover! 🐈 I have two furkids of my own – a blue-eyed Siberian cat named Karakita, and a Siberian Husky Sundance who is the boss of us all. A lot of my motivation comes from my love of animals and want them to be treated with respect 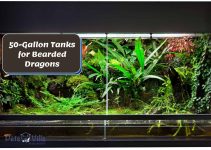 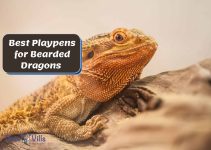 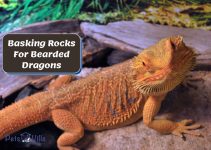