Chinchillas are rodents that originate from the Andres mountains in South America.

Where do chinchillas live in the wild? Chinchillas used to live in Bolivia, Peru, Argentina, and Chile. Sadly, chinchillas are almost extinct. The only known colonies left in the wild are in Chile Andes Mountains [1].

Chinchillas are almost becoming extinct due to being hunted for their thick coat. This article explains the origin of chinchillas and more information about chinchillas.

READ MORE: All About Chinchilla Barking and Other Noises

Where Do Chinchillas Live In The Wild?

Wild chinchillas come from the Andes Mountains in South America.

These rodents belong to the family and come in two different species [2], Chinchilla lanigera and Chinchilla brevicaudata.

Chinchillas are social animals and like to live in large herds.

They live in high-altitude areas of up to 14000 feet, where they inhabit rock crevices or burrows. Their small size, mouse-like rounded ears, and super dense fur allow them to live in high elevations comfortably.

Chinchillas can jump up to 5 feet high and use this ability to help hunt for food.

While chinchillas once lived in the mountainous areas of Bolivia, Peru, Argentina, the last remaining colonies live in Chile.

In the past, chinchillas have been hunted because of their fur, especially in the 19th century.

While many people own pet chinchillas, they are either sold by breeders or farm-raised. Due to habitat loss and poaching, it is tough to find chinchillas living in the wild.

The Chinchilla National Reserve was established in 1983 [3] to protect the animals.

Related: Where Do Chinchillas Originate From?

What Do Wild Chinchillas Eat?

WARNING: Make sure not to feed your pet chinchilla any of the foods below as it can make them very ill. This is for wild chinchillas only.

Most of these are readily available in their natural habitat.

If you have pet chinchillas, their dietary needs [4] are different from wild chinchillas.

The Royal Society for the Prevention of Cruelty to Animals recommends chinchilla owners don’t feed them seeds and nuts because they have high cholesterol levels.

Instead, it would be best to feed them small amounts of grass-based pellets, hay, and clean drinking water.

How Were Chinchillas Domesticated?

A colony of chinchillas was first transported to the US by Mathias Chapman. An engineer who worked in Chile in 1918. He purchased a chinchilla from a local breeder, and his interest in the animal developed [5].

He came up with a plan to transport them for breeding.

His first request to transport the rodents from Chile was not approved until 1923 when permission was granted. He carried 12 chinchillas that year.

In addition, in the 1920s, the Chileans attempted to breed chinchillas in their home of Chile.

Many breeding farms sprouted and began operations, and bred species were then sold to other countries such as the UK, Canada, and Australia. 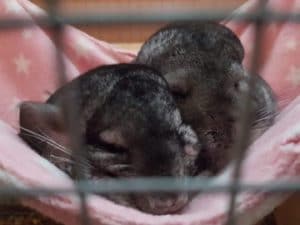 There is a couple of noticeable difference between pet and wild chinchillas.

Study research conducted in 2001 found that while pet chinchillas are susceptible to dental diseases, it is not the same with wild chinchillas.

Pet chinchillas have long teeth, while wild chins have shorter teeth. The longer teeth in pet chinchillas appear to cause tooth lesions, which can be painful to the chinchilla.

The difference in diet between the two variants influences the type of teeth each type has. Chinchillas sold in pet stores are pet chinchillas.

They are incredible pets for kids and many reasons. They are friendly, cheap to maintain, cuter, and fluffier compared to wild chinchillas.

How Do Wild Chinchillas Reproduce?

Chinchillas become sexually active at eight months old. Breeding season is during May and November, but they can still breed at any season of the year. The estrous cycle of a chinchilla lasts between 30 and 50 days.

The gestation period for female chinchillas is longer than other rodents. Chinchillas between the age of 1 and six old are known as kits.

The weight of the kits is between 30 and 60 grams at birth.

Because of the duration of the pregnancy, young kits are born with their eyes open and fur.

The kittens suckle milk for about eight weeks. Kittens frequently communicate with their mothers with high pitch chirps to signal anger.

Chinchillas live up to 10 years, but some survive up to 18 years.

How Long Do Wild Chinchillas Live For?

The pressure to survive is the leading cause of their short life, and they are also hunted for their fur coats and by predators.

Wild chinchillas must hunt for food to survive, and vegetation in their natural habitat is also disappearing.

How Long Do Domestic Chinchillas Live For?

Chinchillas are ideal pets for many people because they have a long lifespan. On average, domestic chinchillas live up to 20 years.

This is longer than the wild chinchillas. Pet chinchillas also receive medical care when ill or injured.

However, some chinchillas die before 15, especially if living conditions are poor.

Take a look at this video below that explains the chinchilla’s lifespan deeply.

The International Union for Conservation of Nature (IUCN) classifies chinchillas as vulnerable species because their population has drastically diminished because of habitat loss.

Currently, the Chilean mountains have an estimated 10,0000 wild chinchillas.

Some laws protect chinchillas in their natural habitat, but it is challenging to control hunting in the mountain ranges of the Andes.

Chinchillas are still being illegally hunted for their fur.

Chinchillas are rodents from the Chinchillidae family.

These rodents have longer hind limbs with forelimbs and four short toes.

Chinchillas differ in size, with the average chinchilla weighing about 2.2 pounds, while some even get to 6.6 pounds in weight.

Chinchillas come from the Andean Mountains of South Africa.

Wild chinchillas are endangered because of the hunting pressure from people who sell their pelts.

One coat requires 100 chinchillas to be made.

Chinchillas are curious creatures and love to explore their environment.

They have dense fur; this trait makes them survive in cold areas.

Chinchillas have from 60 to 90 hairs per follicle, while humans have one hair per follicle.

They stay hidden in rock crevices during the day and come out at night to search for plants to eat.

Since the ancient Incas, chinchillas have been hunted for their luxurious fur. By the 20th century, however, the numbers of wild chinchillas had declined severely. Although the species is now protected by law in its native habitat, hunting continues.

Some scientists believe the wild chinchilla is nearly extinct.

The species thrives in captivity; however, it is bred on farms to provide pelts for the fur industry.

A chinchilla pelt is considered the most valuable pelt globally, considering the animal’s size and weight.

Attempts to add captive-bred chinchillas to wild populations have failed.

Decades of selective breeding for the fur trade have changed the species so that individuals can no longer survive in the wild.

Chinchillas love to nibble on the fingers. Do not be alarmed if they do this.

By nibbling the chinchilla signals acceptance and affection.

Chinchillas are herbivores. They require food that is rich in fiber.

However, it can cause calcium-bladder stones and obesity.

Alfalfa is suitable for nursing and growing chinchillas.

Other than eating unlimited amounts of hay, chinchillas will also appreciate one or two tablespoons of pellets per day. There are pellets explicitly made for chinchillas.

Sugary foods such as yogurt, dried fruits, and raisins and fatty foods such as sunflower seeds and nuts must not be given to the chinchilla as they can cause obesity and gastrointestinal upset.

Your chinchillas need enough water to remain hydrated throughout the day. Give the water every day through a sipper bottle.

How Do You Care for Chinchillas?

Chinchillas should be kept in the space below 80-degree Fahrenheit because they can quickly overheat.

They don’t have sweat glands like humans, so therefore, if they get too hot, it takes them a while to cool down, and they are prone to overheating.

If they overheat, you should cool them down by lowering the room temperate or placing a cold stone slab in their cage that they can lie down on.

Chinchillas need a lot of space to run and play around. Therefore, the bigger the cage, the more comfortable the chinchillas.

It would be best if you also cleaned their care often.

Chinchillas need to take a dust bath three times a week. Never wash your chinchillas in water as it is dangerous to the fur.

Chinchillas are highly fragile. They can easily get traumatized if they are frightened. They are scared. Chinchillas are also susceptible. If you notice uneasiness, let them out of the cage.

Keep in mind; chinchillas are sensitive to draughts, direct sunlight, heat, and fluctuations in temperatures.

Take a look at this video for additional information about taking care of chinchillas.

How To Make Sure Your Chinchilla Has a Long Healthy Life

To make sure your chinchilla lives a long healthy life, you need to give them the proper diet to ensure they remain healthy.

You need to feed them high-quality food. Chinchillas love to eat Timothy’s hay.

Therefore, make sure you provide them with enough. Chinchillas should have a constant supply of Timothy Hay and water with a small amount of grass-based pellets.

Just like hamsters, chinchillas need to do a lot of exercises and plenty of toys and sticks to chew on to grind and wear down their teeth.

You need to make sure their cage is always clean and should be cleaned twice a week.

If you have a bigger cage, consider getting another chinchilla. Chinchillas live in colonies or groups while in the wild. They are social animals, and so they appreciate some company.

Where are chinchillas illegal?

Most US and UK states have legalized chinchilla for pet ownership. However, some states such as California and Hawaii haven’t. It’s best to look this up for your location.

Can chinchillas and rabbits live together?

Can chinchillas give diseases to humans?

Chinchillas do not transmit diseases to human beings.

How do chinchillas survive in the wild? Let us know in the comments.

4. Caring for Your Pet Chinchilla [Internet]. Available from: https://cvm.ncsu.edu/documents/caring-for-your-chinchilla/ 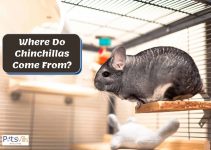