If this is your first time owning a guinea pig, you’ll probably be worried if sneezing is regular or if something is wrong with them.

Do guinea pigs sneeze? Yes, guinea pigs do sneeze. They will usually sneeze due to allergies, changes in the weather, or debris and dirt. This is normal and harmless as the body tries to remove foreign materials from the body. However, sneezing can be a sign of a more serious problem like a cold or respiratory infection.

In this short guide, I will go further in-depth to learn why guinea pigs sneeze, how they sneeze, and when they need to seek medical attention.

That way, you’ll know how to distinguish between a normal sneeze and a sneeze that requires a veterinary visit.

Why Do Guinea Pigs Sneeze?

Guinea pigs are no different than humans when it comes to sneezing. They will sneeze to remove foreign materials from their system.

Sneezing is normal and part of the guinea pig’s defense against foreign materials. There’s nothing to worry about if they’re sneezing once in a while.

However, sneezing excessively over time can lead to a more serious problem, like a respiratory infection. [1]

If they have any of the following symptoms, it’s likely they have a respiratory infection and will need to see a vet:

If your guinea pigs don’t appear to have any of the symptoms above, they may be allergic to things around them. Below are some of the things that could cause an allergic reaction:

How Do Guinea Pigs Sneeze?

The way guinea pigs sneeze is similar to humans. Right before sneezing, they will stare out for a second, then make a high-pitched sound and shake their head vigorously. Sometimes, sneezing can be accompanied by mucus.

If they expel mucus, guinea pigs will usually clean it up themselves. There may be some mucus that they can’t reach. If that happens, you will need to clean it for them so it doesn’t become crusty and cause irritation.

To clean them, gently wipe them down with a warm, damp cloth. Never use regular soap on guinea pigs. They could easily ingest the chemicals from the soap when they lick their fur to clean themselves.

Instead, you can use specialized pet wipes to clean their face and the rest of their body. This wipe has been formulated with natural ingredients, so it’s safe for them.

Check out this video of a guinea pig sneezing.

What Can Make Guinea Pigs Sneeze?

Many things can make guinea pigs sneeze. The most common cause is dust in the air. In most cases, dust which arises from the hay and litter is unavoidable and cannot be eliminated completely.

However, if your guinea pigs are suffering from it, you can try to use bedding that is free of dust. This should help prevent them from sneezing too often.

Even though the bedding is dust-free, there will always be some dust around them. Dust in the environment is invisible to the naked eye.

Changes In The Weather

Another reason guinea pigs may sneeze is due to changes in the weather. This can happen anytime during the year, especially during the winter months.

If the temperature gets warm and dry, this may start to irritate the guinea pig’s nasal passageways. This irritation will cause them to sneeze.

Sometimes they may start to develop a runny nose along with sneezing. Allergies can also cause this.

If you suspect allergies, you should take them to the vet for a proper diagnosis and treatment. They will either prescribe medication to treat the allergy, or you may need to buy specially formulated food or bedding.

Letting the guinea pigs live with allergies will affect their health and could potentially be deadly. For that reason, always seek medical attention if you suspect them of having an allergy.

What Does Sneezing Mean In Guinea Pigs?

A guinea pig that’s sneezing occasionally is no cause for concern. Dust and other particles float in the environment at all times. When guinea pigs breathe some of it in, they sneeze to prevent the particles from getting into their bodies.

However, when guinea pigs start to sneeze more than usual, that should be something you need to consider.

Excessive sneezing is a sign the guinea pig is sick. Along with sneezing, they will often be coughing or wheezing as well. They will make a lot of noise when they are sick.

In addition, heavy breathing may also be a sign that they are sick. They may start by making a deep breathing sound, but if this later turns into a crackling sound, you probably need to see a vet.

Discharge from the eyes is another sign that the guinea pigs are not feeling well. They will keep their eyes half shut and have watery eyes.

If you notice any of the above signs, your guinea pigs are sick and should be taken to the veterinarian immediately for treatment.

How Often Do Guinea Pigs Sneeze?

How often guinea pigs sneeze will depend on several factors. It depends on the season, their environment, and the materials you’re using for their cage.

Usually, a couple of times per day, you will find them sneezing.

On the other hand, if they sneeze more often, it could mean they are allergic to their bedding. This is the first thing to check. Start by removing their bedding daily and see if the sneezing stop.

If it does, it means the bedding is the problem and should be changed to something else.

If the bedding isn’t the issue, check the environment that they are in. If you’ve placed their cage next to the windows, dust and debris from outside may cause them to sneeze excessively.

Try moving their pen to a different location to see if that cures the sneezing problem.

Could stress be causing my guinea pig to sneeze?

Like any living organism, when a guinea pig is stressed, its immune system is affected, and it can become ill. You may ask what on earth a guinea pig would have to be stressed about. Well, moving from a store to your home could be stressful, not to mention a crowded hutch or the other guinea pigs bullying the “new kid on the block.” If your guinea pig is sneezing more than usual, it may result from one of these issues.

Can I add anything to my guinea pig’s diet to prevent the sniffles?

Absolutely. Like humans, guinea pigs can’t produce Vitamin C, so you need to ensure they get regular doses, either in the form of tablets or leafy green vegetables like spinach, broccoli, or kale.

Do guinea pigs sneeze? Well, the short answer is yes, and in most cases, they do this to prevent foreign particles from entering their body.

If they sneeze a few times daily, this is normal, and you don’t have to worry about it. When they start to sneeze excessively, that’s when it could be a problem.

When you doubt why they sneeze too often, you should take them to the veterinarian for further examination.

So, did you ever see your guinea pig sneezing? Let us know in the comments section! 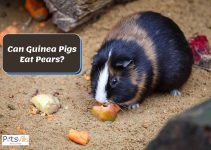 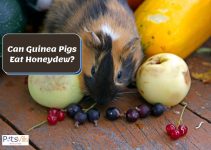 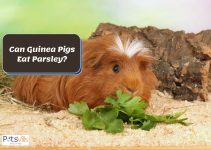