Are having trouble deciding whether a leucistic sugar glider is suitable for your household?

This article will offer you some clarity by discussing everything about these animals.

It’ll make sure you know whether your family is ready for this responsibility.

Let’s dive right in, shall we?

You may also like: How Much Does it Cost to Adopt & Own a Sugar Glider?

What is a Leucistic Sugar Glider?

Leucistic sugar gliders are an extremely easy variation to pick out from the pack.

These fun, little creatures will have an all-white coat and black eyes.

Not surprisingly, this color variation has led many people to call them black-eyed whites.

You might also notice faint yellowish marking in the areas where standard gray gliders would have black coloring.

This trait isn’t a predominant one, but it does show up on some leucistic gilders.

Another distinct character trait would be having transparent or translucent ears, white feet, and white hands.

As you might expect, this all-white coloring makes leucistic gliders somewhat of a valuable commodity.

You don’t often come across these types, and many consider them relatively rare.

Why Do Leucistic Sugar Gliders Have All White Coloring?

Leucistic sugar gliders actually get their white coloring from a genetic defect. According to Merriam-Webster, leucism is.

an abnormal condition of reduced pigmentation affecting various animals (such as birds, mammals, and reptiles) that is marked by overall pale color or patches of reduced coloring and is caused by a genetic mutation which inhibits melanin and other pigments from being deposited in feathers, hair, or skin.

It results in a gilder having their entire surface or patches of their body surface not capable of making pigment. In other words, it turns their coloring white.

Sugar gliders aren’t the only animals known to have this condition. It’s not too uncommon in species like the white buffalo, killer whale, and white stag.

Leucistic sugar gliders aren’t the only all-white color variation within this species.

These animals do come in an albinovariation that looks a lot like a leucistic glider would.

It has led many potential glider owners to mistake one variation for the other.

But there’s a critical difference between the two that easily distinguishes one from the other, their eyes.

Albino sugar gliders will be all white with red eyes, while leucistic gliders feature black eyes. It makes telling them apart relatively easy once you have the right information.

If you’re looking to learn more about Albino sugar gliders, here’s a complete guide to these fascinating animals.

It’ll tell you everything a person might want to know about the variation.

How Long Will a Leucistic Sugar Glider Live?

A pet owner might assume leucism would affect a leucistic glider’s lifespan negatively.

But this condition shouldn’t have any effect on how long your favorite pet ends up living.

Leucistic sugar gliders should live as long as any standard gray or other variation would.

Their lifespan would be between 3 to 9 yearsin the wild, depending on several environmental factors.

But pet sugar gliders tend to live much longer, ranging between 10 and 15 years.

These small marsupials should be in your life for a very, very long time and shouldn’t be seen as a short term investment.

Getting a sugar glider isn’t the same low responsibility level as other small pets, such as hamsters or guinea pigs.

I would suggest making sure you’re ready for a decade long companion before getting one.

How Much Does a Leucistic Sugar Glider Cost?

If you’re looking to buy a leucistic sugar glider, the price can fluctuate quite a bit.

Keep in mind that their rarity does make them more expensive than a standard gray or caramel glider would be to purchase.

It’ll depend on the demand for them, your location, and the breeder.

Another thing to research would be each breeder’s certification.

It’s imperative to make sure they’re certified by the USDAbefore spending any money on a sugar glider they’re selling.

It usually ends with them spending a lot of money on trips to the vet for various conditions.

I’d suggest talking with other gliders owners who’ve bought one from them. It’ll provide a better handle on whether this breeder is someone you can trust.

Is Adopting a Leucistic Sugar Glider an Option?

Yes, adoption is an option when it comes to exotic pets like sugar gliders.

In fact, I’m always going to recommend adoption over buying any animal.

There’s plenty of sugar gliders within rescuesand shelters around the country looking for homes.

As I’ve said before, gliders are among the top 10 unique pets people can’t stop adopting.

Since they’re so trendy- and look super cute on social media- way too many people buy them without doing research first.

Then, they realize that they’ve bitten off more than they can chew, and these poor creatures end up getting sent off to a shelter.

Leucistic gliders aren’t an uncommon sight at these facilities, either.

So, please reach out to local shelters or rescue groups before contacting breeders.

I’m quite confident that you’ll be able to find one of these beautiful gliders to rescue if you look hard enough.

If you plan to be a new sugar glider owner, there are a few things to know before getting one.

As far as overall care and personalities go, leucistic gliders aren’t any different than the other sugar glider colors, which are: standard grey, red sugar gliders, and so on.

We covered pretty much everything you need to get started in  our easy guide to sugar glider care for new owners.

Some covered topics include best diets for sugar gliders, health care tips, finding a vet, and much more.

If you follow this article’s information, you should have no problem figuring out whether you’re ready to be a sugar glider pet owner.

I hope We answered all your questions about leucistic sugar gliders. If you do have a few more, please let us know Below. 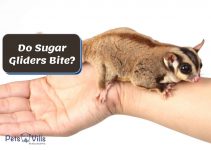